ABOUT PRODUCTION:
The production of apples in the European Union complies with EU quality and food safety systems, which is why the fruits are distinguished by their unique taste and aroma. Rigorous rules for the production of fruit, including apples, meet European and world standards.
The forecast of agricultural production presented in December 2021 by the European Commission shows that by 2031 total apple production in the EU will remain stable despite the decrease in acreage. It is estimated at over 11 million tons. The decrease in acreage will be compensated by the increase in productivity per ha. The document states that in 2031 7.6 million tons of apples will be intended for direct consumption. For many years, Poland has been the largest producer of apples in the European Union and is called the Largest Orchard of Europe, because, depending on the season, it is responsible for the production of 3.5-5 million tons of apples per year.
Statistics Poland gave the first estimates of this year’s harvest in Poland. It was estimated that the crops from apple orchards will reach approx. 4.7 million tons1.
For the second season in a row, fruit growing is struggling with constantly rising production costs. The price of most fruits and vegetables, compared to last year’s prices, is significantly higher. Increased production costs result from the increase in the prices of energy, fuel, fertilizers, pesticides, as well as higher harvesting costs due to a lack of workers, mainly from across the eastern border, i.e. Ukraine. Unstable weather conditions also constitute an additional problem for apple production. Violent phenomena such as storms, squalls, gales and hailstorms effectively destroy crops throughout Europe. Drought turned out to be one of the most dangerous problems in recent months. As much as 15% of all crops in the EU are currently in critical condition, and almost half (47%) in drought-threatened condition. Mainly in France and Hungary, in the north of Spain and Serbia, in the east of Romania, in Moldova and in the Italian Po Valley2. 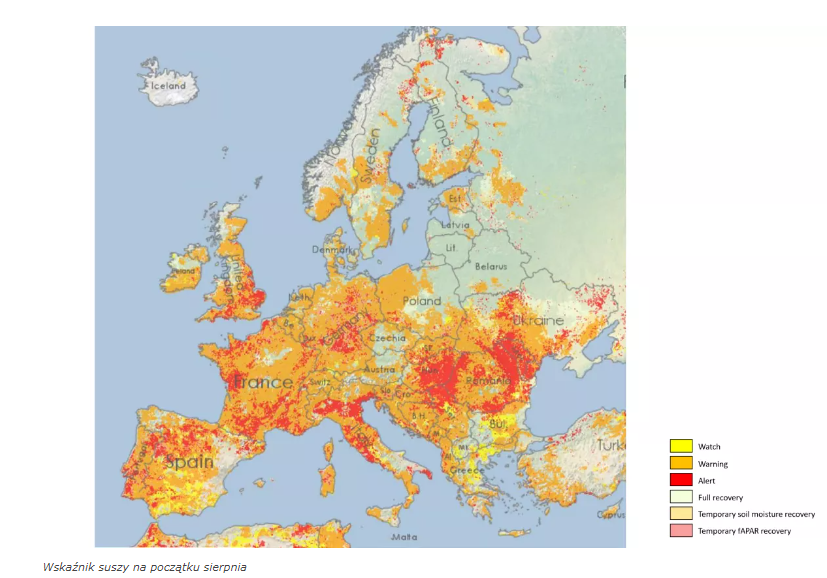 source: https://www.sad24.pl/aktualnosci/susza-sprawia-ze-15-upraw-w-ue-jest-w-stanie-krytycznym/
Poland is not only the largest producer but also the largest exporter of apples in the European Union.
ABOUT EXPORT:
European apple producers, including those from Poland, have significantly expanded their export to various regions of the world in recent years, and its value has been gradually increasing. Unfortunately, the armed conflict in Ukraine effectively slowed down this trend, because in the first half of 2022, apple exports recorded a significant decrease compared to the same period last year. The reasons for the decrease were: the embargo on Belarus, but also problems with the shipment of apples to Egypt, which has been our strategic recipient for several years. Summing up the entire 2021/2022 season, exports to Egypt from EU countries grew in large part and almost 295,000 tons of the fruit3 were sold there. In February, March and April 2022, the export of Polish apples recorded a significant decrease compared to the first half of last year..

As for Egypt, the strategic recipient of Polish apples, exports increased from 15,467 tons in February 2021 to 16,950 tons in February 2022. On the other hand, exports to Jordan decreased from 3,167 tons in February 2021 to 1,716 tons in February 20224 . In March, however, the sale of apples to Egypt in 2022 fell from 15,476 tons to 14,456 tons 5.
According to data presented by WAPA, the apple stocks for the beginning of July this year in individual EU countries were as follows:
Italy — 150,000 tons,
Poland — 94,000 tons,
France — 82,000 tons,
Spain — 56,000 tons,
Germany — 48,000 tons,
Belgium — 40,000 tons6.
Russia’s aggression against Ukraine cut off EU, and above all, Polish fruit producers from eastern markets - specifically Belarus, which forced the search for new sales directions to replace Mongolia or Kazakhstan. Egypt has been a destination engaging EU exporters for several years and Jordan will join it soon. We hope that thanks to the activities carried out as part of the campaign entitled “Time for apples from Europe” we will encourage consumers and importers to stock store shelves only with goods from Europe, which are safe and of the highest quality.