European apples – a guarantee of quality and flavour! Press conference/Cairo/8.12.2018 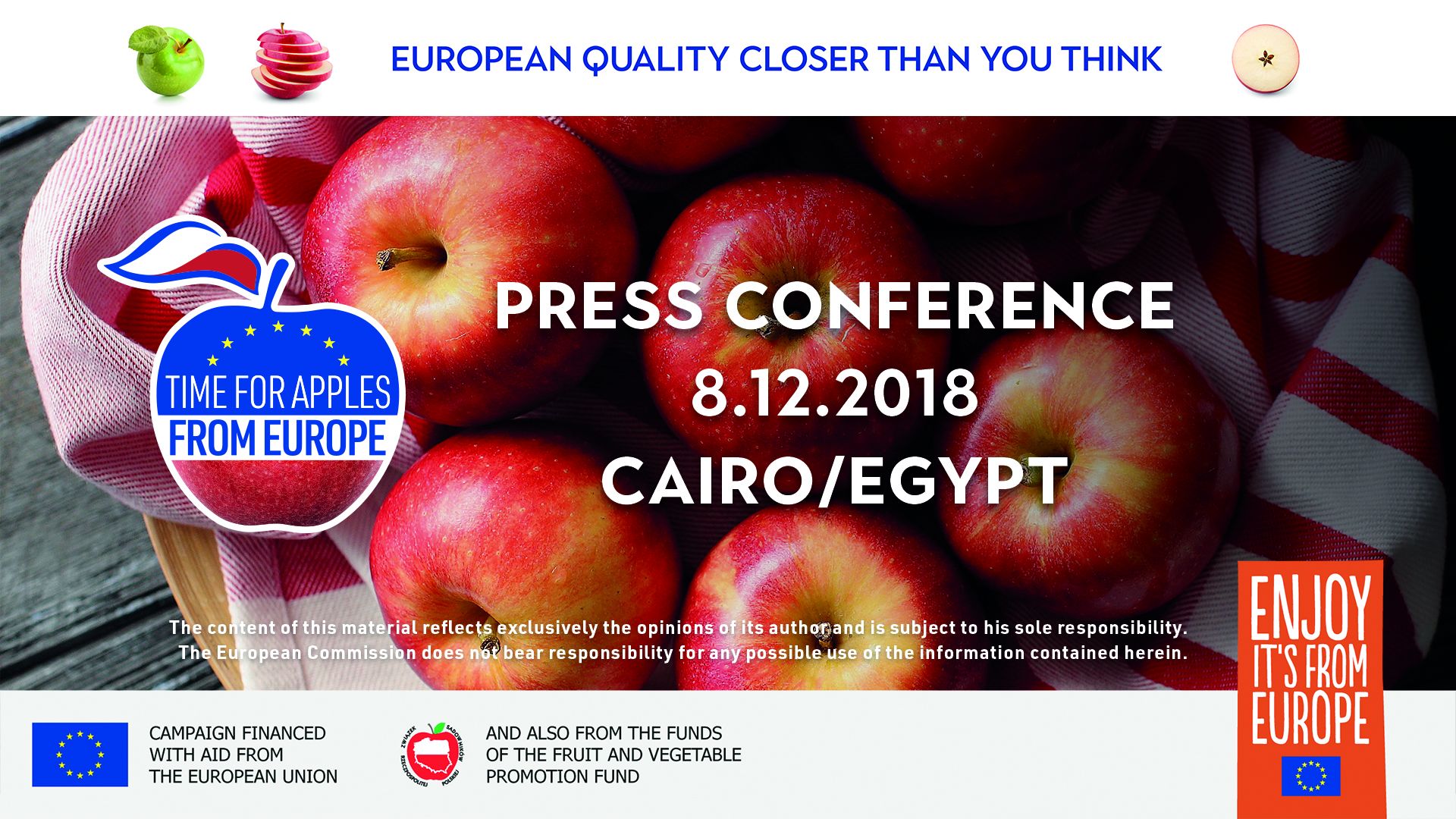 European apples – a guarantee of quality and flavour!

Egypt is the most heavily populated country in the region of Northern Africa and the Middle East, with growing economic potential, classified among the highest on the African continent.  The market of grocery products – food and beverages – in Egypt is continually growing, resulting mainly from the increase in population, while the consumption value of articles is increasing independently of the political and economic situation of the country. The rapidly increasing population of Egypt is directly related to growing consumer demand, and according to Business Monitor International, each year Egyptian consumers will spend more on the purchase of perishable food products, including fruit and vegetables[1].

Under the logo of the "Time for apples from Europe" campaign, European exhibitors specialising in apple cultivation have been present at international agricultural-food trade fairs in Egypt for 2 years, including HACE HOTEL EXPO 2017, Supermarket Show 2018, SAHARA EXPO 2018, HACE HOTEL EXPO 2018, and FOOD AFRICA CAIRO 2018. The entire campaign involves European apples and is financed by the European Commission, as part of the program “Enjoy! It’s from Europe”. Similarly as with numerous other projects involving Egyptian-European cooperation, Time for apples from Europe has the purpose of promoting high-quality products in Egypt, which is an important point on the world map, a crossroads connecting Europe, the Middle East, Africa and western Asia.

The campaign has involved the conduct of activities intended for general consumers as well as for professionals – food importers in Egypt. B2B meetings, cooking demonstrations with the participation of well-known Egyptian chefs, advertisements in the press, on TV and outdoors, promotional activities in supermarkets, charity campaigns and contests in social media, have all been met with wide interest both among participants and in the Egyptian mass media.

Poland, as the leader in European apple production, ahead of other countries in high positions, such as Italy, France and Spain, remains at the top thanks to its unbeatable apples, their flavour, growing traditions and the variety of fruit types. Among them should be mentioned Red Jonaprince, Royal Gala, Najdared, Gloster, Red Delicious, Jonagored, Golden Delicious, Idared, as well as so-called Grójeckie apples, occurring only in Poland and a protected geographical indication.

According to the United States Department of Agriculture (USDA), apple production in the European Union in the years 2016-2017 amounted to 12.6 million tons, while export remained at the level of 1.6 million tons. The main export destinations of European apples were Belarus, the Middle East and countries of northern Africa[2].

Apples are the most widely produced and exported fruit of the European Union, which occupies second place after China in all categories, including consumption[4].

About the campaign Time for apples from Europe: Programs of the European Union are projects that are co-financed by the European Union. These campaigns promote European products and their sustainable methods of production, thereby strengthening activities in the fields of agriculture, the environment and consumer health protection. More information on the campaign “Time for apples from Europe” may be found at the website: www.applesfromeurope.eu. You can also follow the Campaign profile وقت التفاح الأورب  on FB.

Contact:
E-mail: This email address is being protected from spambots. You need JavaScript enabled to view it.

[1] based on a report of the Food and Beverages Industry in Egypt and MENA Region; Arab-African Conferences and Exhibitions ACE, Cairo, 2014;